You are here: Home1 / Newmarket Racing2 / Mehmas on course for two-year-old showdown at Newmarket 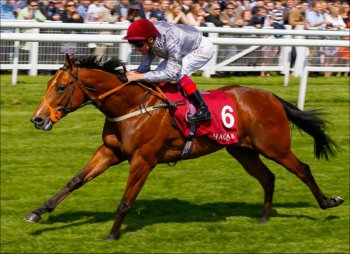 Mehmas is set for a mouthwatering showdown with Caravaggio and Blue Point in next month’s Juddmonte Middle Park Stakes at Newmarket.

The six-furlong Group One is shaping up to be one of the races of the season with the Aidan O’Brien-trained Caravaggio, winner of the Group One Phoenix Stakes, and Charlie Appleby’s Gimcrack hero Blue Point in line to clash with Mehmas.

The Richard Hannon-trained colt finished second behind Caravaggio in the Coventry at Royal Ascot but has since won both the July Stakes and Richmond Stakes, beating Blue Point into second on the latter occasion.

Mehmas was due to tackle the Prix Morny at Deauville but a setback ruled him out of that contest, prompting Harry Herbert, racing manager for owner Al Shaqab Racing, to point towards Newmarket with their star juvenile.

He said: “The plan is for Mehmas to go to the Middle Park.

“Like a lot of horses at the moment, he just had a bit of a dirty scope, it just wasn’t 100 per cent, which stopped him from running yesterday.

“It was such a shame, but he’s in good form and we’ll look to Newmarket.”

Kieren Fallon riding out in Newmarket
Scroll to top